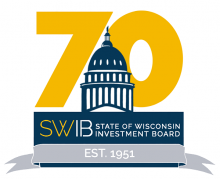 A lot has changed over the past 70 years, but one thing that has remained a constant is the State of Wisconsin Investment Board’s commitment to helping provide retirement security for the hundreds of thousands of current and former state and local government employees and their families who rely on the Wisconsin Retirement System.

This year, SWIB marks its 70th anniversary of service to public employees, local and state government, and Wisconsin. Over the past seven decades, strong leadership, dedicated staff, and an innovative, forward-thinking culture have helped SWIB grow into a premier asset manager recognized around the world for its success.

The idea that would lead to the creation of SWIB can be traced back to the late 1940s, when Gov. Oscar Rennebohm and State Treasurer John Soderegger began searching for a way to invest the state’s $30 million in idle cash balances. In 1951, union leaders John Lawton and Roy Kubista and attorney John Lobb were concerned about the struggle to generate adequate returns on the contributions made to the state’s public pensions.

By building on Gov. Rennebohm’s and Treasurer Soderegger’s ideas, they dreamed of a state agency that could invest the assets of the state’s public pensions in new and innovative ways. Thanks to thoughtful state leadership and a committed Wisconsin legislature, the investment board was born, and Gov. Kohler signed SWIB into law as of June 28, 1951.

The visionary leaders who helped create SWIB might be surprised today at how their idea for a state agency that simply invested in stocks — a bold new approach to investing public funds at the time — has grown from just three employees and $350 million in assets under management into to the sophisticated and diversified asset manager it is today with more than 230 employees and $144 billion in assets under management spread across a diverse and robust portfolio.

The leading edge thinking that led to the creation of SWIB 70 years ago is part of the foundation that makes the agency the investment leader it is today. From being one of the first public pensions to create a private debt program (1965) and to invest in private equity markets (1985), to the addition of international and emerging market stocks to its investment strategy (1989), and the creation of a strong venture capital program (1999), SWIB has always understood that carrying out its commitment to beneficiaries demands not resting on past successes, but always looking to the future.

In 2006, SWIB continued to build on its already strong foundation as a premier asset manager when it began building out its technology infrastructure and highly skilled staff to support the more complex and sophisticated investment strategies being used to find additional sources of value in the ever-changing financial markets. SWIB’s work would also support the significant increase in internal asset management, which increased from 21% in 2001 to more than half today.

Change is inevitable. And, while no one can predict what will change in the next 70 years, one thing is certain: SWIB, with its award-winning strategies and staff, will remain committed to the WRS, its participants, and Wisconsin.